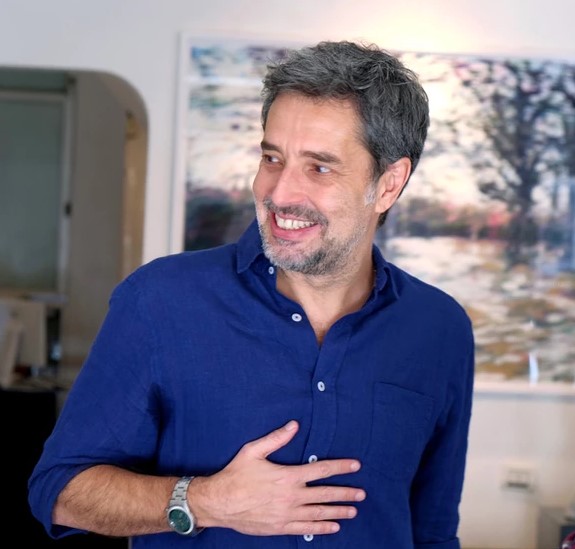 Marco Aurélio Casal de Rey was born in 1961, in São Paulo, Brazil, where he lives and works. His forms of expression are drawing and painting, which have in his brushstrokes of unique movement, the signature of his stroke.

In 2010, he developed the series “Open Air”, bringing Nature as its main focus, an invitation for the viewer to reflect on his feelings and secrets, Landscapes in motion, the visual sensation that creates and induces us, like a breath of wind. The contemporaneity of the Nature theme resurfaces defiantly, as a warning to preservation and threatened beauty, as part of a vegetal turn. The lightness and movement of the brushstrokes refer to sensations, emotions, and memories of well-being. And that is what it focuses on: the human being’s current quest to be at ease with life. Drawings, doodles, sketches, visuals transcribed on papers, archival photographs become sources of research for his poured and elongated gaze on everything.

In 2011, he holds a solo exhibition “Ar Libre” in Barcelona (Spain). In 2012, “Ar Livre” at the Applied Art Gallery in São Paulo (Brazil). In 2018, “Movi mento,” at the Applied Art Gallery in São Paulo (Brazil). He has participated in exhibitions in Florence and Venice (Italy); Geneva (Switzerland); Tokyo (Japan); Beijing and Shanghai (China); Miami (USA); Barcelona, Navarra, and Marbella (Spain); Irun (Basque Country); Ghemt (Belgium); Innsbruck (Austria). Awarded at the VIII Florence Biennial. Between 2010 and 2012, he participated in the French Art Capital, Fine Arts and Autumn Salons in Paris (France). Graduated in Visual Communication and Industrial Design from the School of Visual Arts at Fundação Armando Alvares Penteado (1979-83). He studied with Regina Silveira, Ricardo Ohtake, and Herbert Dushenes He studied at the University, with Carlos Fajardo and Luís Baravelli. He studied with the restorer and painter Nely Toledo, Germana de Angelis, and Lenita Gomes de Mattos.

Marco, besides his art with gouache on paper, has already created prints for the Mario Queiroz and TDB fabrics brands, made murals and hand-painted wall panels for decoration, handmade logos, and also has watercolor and oil painting techniques. “With his painting, he relates and communicates his emotions, what he has seen or imagined, with particular attention to light and color in a dynamic vision in a state of movement. The fascination of his painting pays homage to nature with its deep and intrinsic beauty and that refers to his relationship with illusion and reality created in his work. Thus, nature in its most static form merges with the dynamism of the moment and reality becomes illusion. The illusion is transformed into a new and more authentic essence of his reality.” GianPaolo Trotta , art critic, in Florence (Italy).