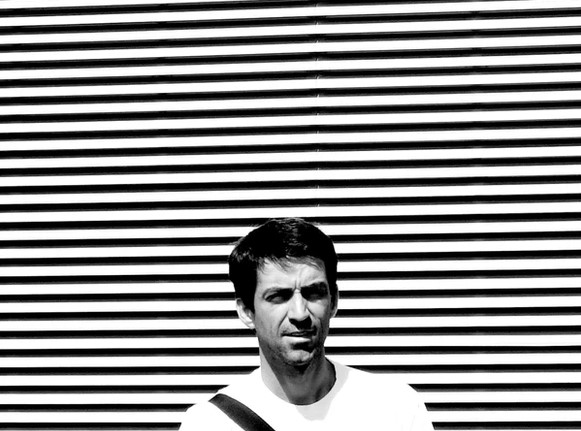 Since 1992, Flavio Samelo has been walking the streets of São Paulo photographing skaters. Some of them were also graffiti artists and other taggers who ended up inviting Samelo, as he is known, to photograph the graffiti and pixos on the city streets as well. This was the beginning of a lot of things for the photographer who ended up getting into street art, just as he got into photography. This other production ended up leading Samelo to introduce in his skateboarding photography the graffiti, graffiti and other urban elements that caught his attention in the skateboarding sessions and that was his differential during the beginning of his photography.

After graduating as a Communicologist and working as Art Director, Photographer, Editor, Illustrator for Brazilian and international skateboarding magazines, as well as collaborating with other subject matter magazines such as MTV Magazine, Folha de São Paulo, Rolling Stone, Adbusters, since 1995. In 2006 he launched a signed sneaker model, by NIKE SB in Brazil, which became a collector’s item all over the world. Soon after, Samelo decided to return to art studies and took a post-graduate course in Art History, where he discovered, among many other references, the Brazilian concrete and neoconcrete artists of the 50s, definitively influencing his research and studies about photography, shapes, and colors.

It was a new beginning for a new production. From then on, his work began to look more and more for a plastic and graphic result that would unite urban photography with the theory and visual research on concrete abstract art that pleased him so much. Artists such as Geraldo de Barros, German Lorca, Thomaz Farkas, Hélio Oiticica, Lygia Clark, and many others from this period became references for his research.

Today, Samelo’s production is twofold: photographic production where all photos have a unique print run, making them indisputable originals, and like his paintings and panels, he has been searching for a new way to mix photography with the concrete painting he has been producing, using photographs as a base for the paintings and transcending the limits of photography by using shapes, colors, and lines, giving a new graphic reality to his photographs. These works have been exhibited in auctions, museums, and galleries throughout Brazil and abroad. He also participated in the 5th Vento Sul Biennial, in Curitiba in 2009, with a specific room for his work.

Currently, he also produces a series of commercial and creative consulting work for large multinationals such as Samsung, Facebook, Oakley, Redbull, and JEEP, among many others. He is also the Owner Content Director of Vista Art, a media and print channel focused on the skateboarding and art market. He is also well known as a photographer/host of the show Pela Rua, which airs on Canal Off, a Brazilian cable channel produced by Globosat since 2010.