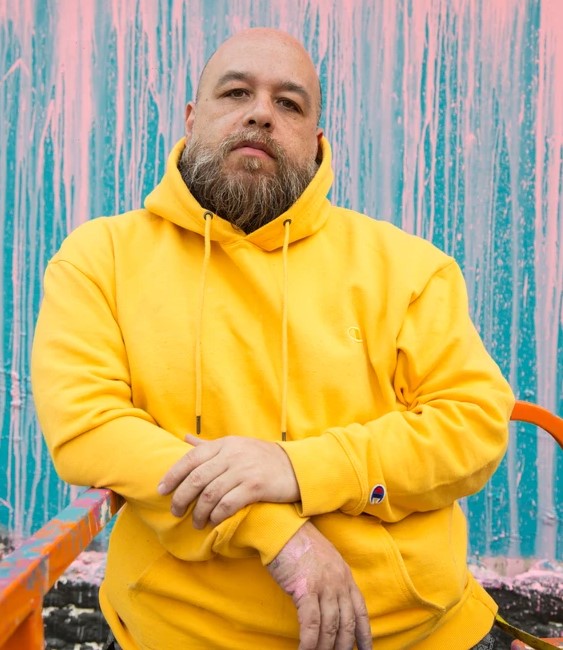 Felipe Yung “FLIP” is an artist who made his name in the streets, where for almost three decades he has spread his traces and colors wherever he goes.

Native trees, eroticism, urban calligraphy (tags and graffiti), characters, in-depth study of camouflage, and a large dose of Japanese culture, among them calligraphy (shodo) and woodcut (ukiyo-e). This mix of influences translated into an originality that has ensured that Flip is now recognized on the national and international scene.

This very particular universe of the artist has guaranteed invitations to work with big names and brands. For rapper Marcelo D2, Flip signed the graphic design of the album and tour “Meu Samba é Assim”, as well as creating the scenery for his acoustic show at the MAM in Rio de Janeiro and for the tours of both albums and his latest project “Assim tocam meus tambores”, made entirely online during the pandemic. His work with camouflage for over a decade, earned him an invitation from Nike Global SB to create the artwork for the Camo Pack, a collection with a special version of the Brazilian national team uniform. In the adidas Collider project, Flip was the only representative from Brazil for the action that brought together artists from various parts of the world, as well as mural paintings and interventions for the brand.

Outside of Brazil, the list of works includes murals for the international chain Sushi Samba in Las Vegas and London. Flip was also one of those chosen to represent Brazil at a cultural event in Moscow at the invitation of the Brazilian Embassy.

From Microsoft to Daslu, from TV shows and concert sets to magazine illustrations, from facades to staircases, from a medieval basement to high-tech terraces, from slums to five-star hotels, to the world of fashion, Flip moves with great ease between the underground, mainstream, and luxury market.

Together with Alexandre Cruz “Sesper”, he created MOST, the first Brazilian urban art gallery that ran from 2003 to 2005, an important milestone in the history of street art in São Paulo. This curatorship and incentive to the underground art of São Paulo resulted in the first exhibitions of some artists, nowadays consecrated in the world scene. Today, Flip continues her curatorial and consulting work for various agencies and brands. In addition to signing the already iconic complex of large-scale murals entitled “Aquário Urbano” in downtown SP.

My way of helping is to pass on my experience of more than 25 years with urban art, where I have worked with big brands and big names.

I can help you get ideas, insights, put together a portfolio, and get on your way.

There are countless stories and experiences in these almost 30 years on the road. The technical and theoretical part is a place to reach with dedication, but the knowledge acquired by me can help you skip some steps, if you are interested in going deeper, as well as tips for entering the area, which are also precious!