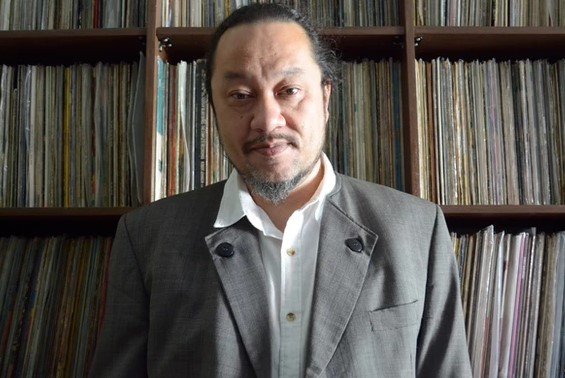 Among the clients, the highlight was the FIFA event for the presentation of Brazil’s host cities for the 2014 World Cup, at Convento do Beato, in Lisbon. Part of the São Paulo Art Biennial’s program (2008, 2010, 2012), Circuito SESC de Artes, São Paulo Fashion Week, Nizan Guanaes and Africa, Tivoli Mofarrej, Titan, Blue Tree Towers Faria Lima, Galeria Nara Rossler, Arthur Lescher, Swarovski, Santander, Converse, AmBev, Spotify, Facebook, among many others. In 1992 he joined the collective that would give birth to Radio MUDA, today a world reference in alternative broadcasting, participating in the production and production of programs until 2006. DJ Paulão is a reference in the new generation when it comes to research on Brazilian music. A researcher of Tropicalism in the 90s, he extends his research to the history of Brazilian discography in the last 70 years. In 2005, he collaborated with the exhibition Tropicalia: A revolution in Brazilian culture , held by the Museum of Contemporary Art of Chicago and the Bronx Museum of Art, and was responsible for the return of the Mutantes, in an apotheotic show at the Barbican Gallery of London. And he assisted with discographic research for the film Tropicália, by Marcelo Machado. He released the vinyl BRAZUCA! samba rock and brazilian groove in the golden years (1966-1978), a compilation of Brazilian samba rock and soul released on the Dutch label Kindred Spirits in 2013, and is in negotiations for the release of the second volume, on the Dutch label Rush Hour.

Since 2014 Paulão together with other partners have Patuá Discos, a store specializing in vinyl records in São Paulo. Whether for its collection, or for the events involving the release of records and books about music, Patuá soon stood out and today is a guaranteed presence in any list of good music stores in Brazil.

Brazilian Music on Discs / All about Jorge Ben Jor

In the mentorship, I will travel through the history of Brazilian music in the last 70 years. Starting from vinyl records, we will travel from bossa nova to the present day, going through the creation of MPB, jovem guarda, protest music, the era of festivals, the 70s, national rock, mangue beat, axé music, until Brazilian music without labels, as it is presented now. All this in a journey through vinyl records, their covers and music, stories and tales.