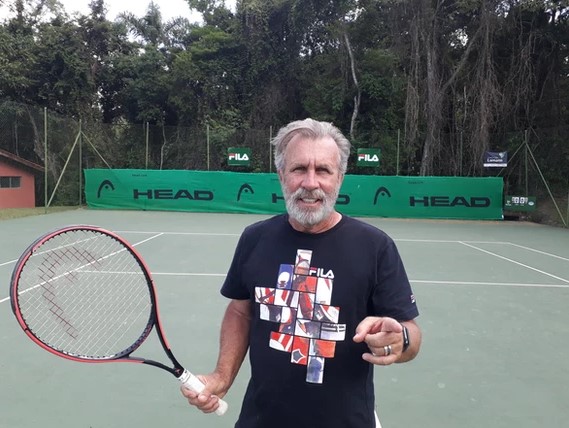 Carlos Alberto Kirmayr was the number 1 tennis player in Brazil for years, he was ranked 36th in the world in singles and 5th in singles. place in the doubles ranking of the ATP – Association of Tennis Professionals. He played for Brazil in the Davis Cup for 15 years, as player, captain, and organizer.

As a coach, he took the Argentinean Gabriela Sabatini to the US Open title in 1990, and trained renowned athletes such as Cedric Piolini, Luiz Mattar, Cássio Mota, Arantxa Sanchez Vicário, Conchita Martinez, Paula Gonçalves (the result of his LOB Institute to encourage Brazilian women’s tennis), among many others…

A pioneer in Tennis Clinics in Brazil, Kirmayr offers modern and up-to-date training, for all levels and ages, thanks to the serious research and renovation work carried out on a daily basis inside his CT and in the international actions and exchanges he conducts.

Kirmayr also developed the teacher training program for the Brazilian Tennis Confederation in 1997, training more than 3000 teachers by 2003. He is currently continuing his project to pass on knowledge and experiences, as President of the GPTCA – Global Professional Tennis Coach Association in Brazil, an international organization that prepares professional tennis coaches for the ATP and WTA circuits.

He is also a pioneer in tennis social projects, creating the Tennis in the Hose project in Rio in 2002, and since 2017 has been developing a training program with the Guarda Mirim of Serra Negra that he intends to replicate throughout Brazil.

A lifetime dedicated to Tennis, led Kirmayr to create the Kirmayr Prep School, an academic-technical program aimed at training and preparing young tennis players to obtain scholarships in American universities and/or professionalism.